Richart Ruddie once fancied himself as Marty McFly,  or so a picture of him with a hover board implies.  If only Richart Ruddie "McFly" could go back in time and undo the cascading amount of bad news, including allegations of fraud surrounding Ruddie that raise questions about his structured settlement associations.

UCLA law professor Eugene Volokh described in a March 30, 2017 article in the Washington Post, how self-described  "Arizona legal luminary" Daniel Warner and his partner Aaron Kelly  (whose LinkedIn profile refers to Kelly Warner law firm as " different name same jerks") have engaged in litigation that seems to be fraudulent. The purpose of the lawsuits? To “trick” Google into removing negative articles and comments from their search results about people accused of very serious crimes and other misdeeds by filing  lawsuits against fake defendants.

During his research, Professor Volokh found multiple lawsuits that were filed by Daniel Warner and Aaron Kelly that appear to have fake, non-existent defendants & have fake notarizations. The USA Herald provides a nice summary in its April 20, 2017 article:

"Attorney Daniel Warner’s friend and colleague, Richart Ruddie, whom Warner has a relationship with and has worked with on multiple occasions, appears to have filed a fake lawsuit to deindex a RipOffReport about Warner   .

In what appears as an attempt to hide Richart Ruddie’s identity, Ruddie filed a lawsuit listing his name as “R. Derek Ruddie” against another seemingly fake defendant named “Jake Kirschner” that chose to represent himself pro se.    [ As an aside Richart Ruddie signed a check drawn on RIR1984 LLC (the now defunct company owned by him and Ryan William Blank to pay for the phony Rhode Island suit using the name Derek Ruddie  - see inset] 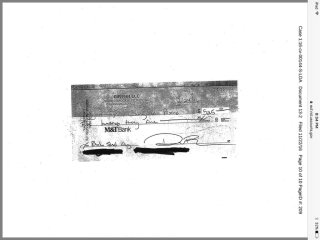 Ironic that on March 3, 2013,  comments by Rorwatchdog, an alias used on three separate Rip Off Reports by the poster to appear as if they came from Rip Off Report owner Ed Magedson himself. were made about competitors in the structured settlement factoring industry, while promoting (via links) Einstein Structured Settlements and Money Settlement (dot)Net, brands associated with Richart Ruddie.  See my contemporaneous post here from May 11, 2013.