There are more and more instances of salespeople pitching people to buy "secondary market annuities" with inaccurate and misleading information has been revealed in ongoing research into just how badly seniors, CD holders ,Mom and Pops and injury victims have been targeted.  This post follows the trail with some surprising results.

Sequence Media News YouTube Channel Posted Video of Company That Promoted as Annuities, a Product That Was Not an Annuity

It's disappointing that Sequence Media supports the use of the term " annuity" to market a product that is not an annuity.  Update: As of January 20, 2020 Sequence Media News still has the video up on its You Tube Channel.

It is truly shocking that Sequence Media published  and still mantains a piece from a company that sourced from a company related to Access Funding executives only months after the Washington Post expose about the Access Funding scam of Baltimore City minorities. As you can see for yourself from the screenshot below of a video entitled "Ask Mr. Annuity: Secondary Market Annuities Are “The Key to Income Planning” posted to the Sequence Media YouTube Channel on November 25, 2015, licensed insurance agent** Steve Lance* misrepresented the rating of Hartford Life Insurance Company as A+. In fact at the time the video was posted Hartford Life Insurance Company rated two notches below that at A-, where it had been since March 2013. In fact, AM Best reported  Hartford Life's AM Best rating was downgraded to A from A+ on February 27, 2009. 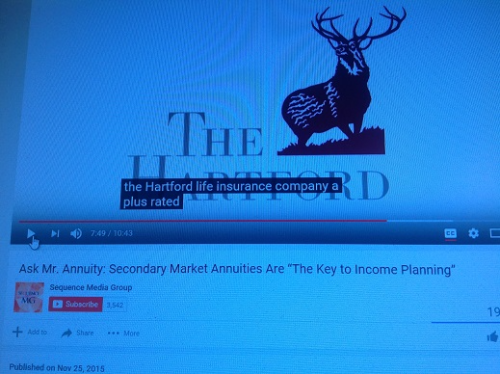 Like the other purveyors of structured settlement derivatives, Ask Mr Annuity's  SMA Buyer's guide, in my opinion, did not adequately discuss transactional risk such as that which has impacted a Pennsylvania couple who lost $153,000 of retirement funds invested in a structured settlement derivative and a Florida woman whose payments on $150,000  retirement investment via an Oregon intermediary have been  suspended due to competing claims arising out of the Access Funding Baltimore lead paint mess.  In the PA case, arranged by a NJ intermediary, a qualified order was thought to be obtained but was later vacated after a Sumter County FL judge determined that the court order was procured by fraud, a fraud that was not uncovered by either the originator or intermediary, despite both the originator and the intermediary having each retained attorneys who reviewed and blessed the transaction.

In another video entitled "Ask Mr. Annuity: Secondary Market Annuities Are a Hedge against Financial Fluctuations", published August 20, 2015 on the Sequence Media YouTube channel, Lance discusses an investment opportunity in factored structured settlement payment stream (misrepresented as an annuity) "backed by" Athene Life and misrepresents that they acquired Aviva with $95 billion in assets. In fact, according to the October 2, 2013 press release issued by Aviva plc, the "transaction proceeds" from the sale of Aviva USA Corporation  to Athene Holding Ltd was "US$2.6bn (£1.7bn) and were subject to customary completion adjustments."  An article of note appeared in the Dealbook section of the New York Times on April 12, 2015 entitled Risky Moves in The Game of Insurance concerning the Aviva transaction,   The article discusses the Athene acquisition of Aviva USA.  Of note is that the URL for the article includes "insurers-bypass-rules-to-add-hidden-risk". 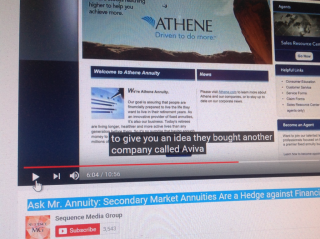 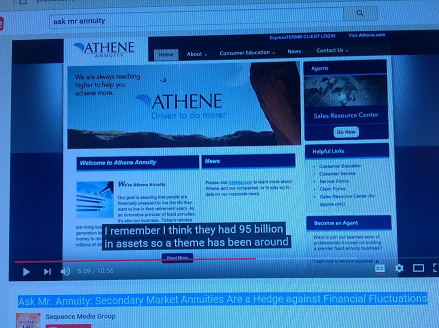 A Jacksonville Florida retiree invested $150,000 in a "secondary market annuity", sold through Oregon Intermediary Somerset Wealth which at the time of sale heavily promted factored structured setlement payment streams as "secondary market annuities. The structured settlement payment rights turned out to sourced from an entity related to the CEO of Access Funding. The investment represented substantially all of her husbands retirement funds with the expectation that payments would begin to flow in January 2018. In February 2017 she was notified her husband's payments were being suspended pending the outcome of the Maryland litigation against Access Funding et al. due to competing claims. Somerset has since ceased selling factored structured settlement payment streams, using the msileading leable or otherwise. Update:  Three years later the payments are still suspended with ongoing litigation and appeals working their way through Maryalnd Courts. However, a FINRA suit ensued as a result of the delays resulted in a a monetary settlement by the Somerset CEO for $50,000 and another for $55,000 paid for by a registered rep that used to work for the firm. according to FINRA Broker check.

*determined from listening to the posting

**sourced from AZ Department of Insurance records  (4/5/2017),  Steven Lance has been licensed as an insurance agent since 1994.