A "Structured Dismissal" in a bankruptcy is not a structured settlement, "so-called" or otherwise. Fortunately former Supreme Court Justice Stephen Breyer was up to the task when a Washington DC lawyer attempted to frame the mischaracterization in a recent hearing. Unfortunately Breyer's subtle efforts could not prevent another Washington DC law firm from amplifying the mischaracterization in its commentary in JD Supra Business. featuring "key takeaways" from oral arguments on December 7, 2016 in the bankruptcy case Czyzewski v. Jevic Holding Corp.

Part of my mission as the Structured Settlement Watchdog®, is to clear the path for legitimate structured settlement information via critical commentary/education. In this case, four Washington DC attorneys at Orrick Herrington & Sutcliffe LLP  have co-authored a review of oral arguments in a Supreme Court case and have muddled up the term  "structured settlement".

Here is their review as published online at JD Supra Business on December 12, 2016:

"The United States Supreme Court heard oral arguments on December 7, 2016 in Czyzewski v. Jevic Holding Corp. The case poses a question that has divided the Second, Third, and Fifth Circuits: Whether a bankruptcy court may authorize the distribution of settlement proceeds in a way that departs from the statutory priority scheme in the Bankruptcy Code, including through a so-called “structured settlement.”

According to the transcript of the hearing which the lawyers at Orrick graciously linked to their article,  after the term "structured settlement" was interposed for structured dismissal and batted around like a beach ball between the lawyers and Justices Kennedy and Sotomayor, Justice Stephen Breyer, stepped in and astutely asked the following:

Justice Breyer  "But that's --I see that point, which you've made several times, is a very good point. I --clarify a basic misunderstanding on my part. What's a structured settlement?"

Bob Landau, another Washington DC attorney responds "Well, I think a structured settlement is --it's not a legal term. It's something they've come up with in this case".  (emphasis added)

Justice Breyer: Why not just call it a settlement?

Bob Landau: I think you could. And I think in that - 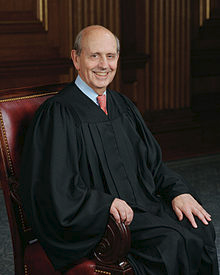 Who is Justice Stephen Breyer?

Justice Breyer was born in San Francisco, California, August 15, 1938. He married Joanna Hare in 1967, and has three children - Chloe, Nell, and Michael. He received an A.B. from Stanford University, a B.A. from Magdalen College, Oxford, and an LL.B. from Harvard Law School. He served as a law clerk to Justice Arthur Goldberg of the Supreme Court of the United States during the 1964 Term, as a Special Assistant to the Assistant U.S. Attorney General for Antitrust, 1965–1967, as an Assistant Special Prosecutor of the Watergate Special Prosecution Force, 1973, as Special Counsel of the U.S. Senate Judiciary Committee, 1974–1975, and as Chief Counsel of the committee, 1979–1980. He was an Assistant Professor, Professor of Law, and Lecturer at Harvard Law School, 1967–1994, a Professor at the Harvard University Kennedy School of Government, 1977–1980, and a Visiting Professor at the College of Law, Sydney, Australia and at the University of Rome. From 1980–1990, he served as a Judge of the United States Court of Appeals for the First Circuit, and as its Chief Judge, 1990–1994. He also served as a member of the Judicial Conference of the United States, 1990–1994, and of the United States Sentencing Commission, 1985–1989. President Clinton nominated him as an Associate Justice of the Supreme Court, and he took his seat August 3, 1994.

Justice Breyer retired from the Surpreme Court in 2022 and was replaced by Justice Ketanji Brown Jackson, the first African American woman to be elevated to Supreme Court Justice.