But what's with the funny stuff on the Structured Settlement Ninja Facebook page?

First the "intrigue", before the comedy

"Pondering" the first image, taken of the public facing  Facebook page a few weeks ago, there is a January 23, 2013 story about the Powerball lottery where a Cara Lynch asks, as if startled,  "Yikes- when the drawing ?" is, at 10:42am and Melissa Stoloff Springer, David Springer's wife answers  5 minutes later  "at 11 I think". In a screenshot taken today Cara Lynch asks the question at 1:42pm, 3 hours later the same question that Melissa Stoloff Springer answered at 10:47am, Lynch also asking  as if startled, and as Dr. Emmett Brown might say Melissa Stoloff Springer "has been erased...from existence".  How is that possible?

Then comes the funny bit

2 posts down Melissa Stoloff Springer and Melanie Miller like the post.   Melanie Miller is a fake, what proved to be a "cartoon character" made up by David Springer and held out as an employee,  which he admitted to in legal testimony under oath. So why with a clean financial  slate, and the $50,000 Woodbridge judgment against him the $50,000 legal fees owed to Offit Kurman and other debts erased like etch-a-sketch by a Maryland Bankruptcy Court, is there a need to proliferate the fakery?  Who knows. 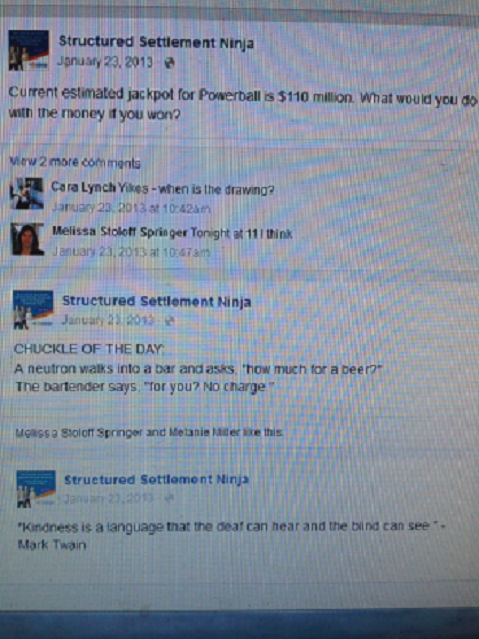 This is what it said recently, includes Springer's wife and Cara Lynch at 10:42 am