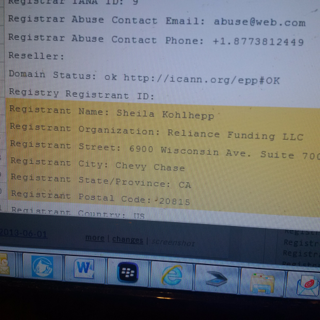 Reliance Funding LLC appears to be the reincarnation of Access Funding LLC.  Why not?  What do you do when the world is out to get you over  the Maryland Attorney General and Washington Post allegations that you have victimized Baltimore lead paint structured settlement recipients and you're facing a storm of litigation?  Is your move to close down and open up under another name. Is that what's going on with Access Funding and Reliance Funding?

The needle of evidence is leaning in that direction for the company that buys structured settlements.  Here's what we know:

1. According to the Maryland Secretary of State, Reliance Funding, LLC is a Maryland LLC  formed October 15, 2015.

2. Here's how the Reliance Funding website was registered on November 1, 2015  [ Source: Domain Tools].  Funny thing,  it's the same address and suite number as Access Funding used,  6900 Wisconsin Ave. Suite 700 Chevy Chase, MD. To me its the sort of pratfall one would expect from "Chevy Chase".  They do not publish an address on their website and recently privately registered their domain perhaps hoping nobody would notice that there was a moment of clarity captured for eternity in the whois record.

3. Ms. Sheila Kohlhepp ,  the Registrant of the domain, is Operation Manager IT for Reliance, who lives in the same town as "that David Springer", primarily lists her Access Funding colleagues on her Google Plus profile.  Here she was listed as the office manager of Access Funding.  In the picture you can see that she is the Registrant for Reliance Funding LLC.

4. Mark Gutierrez has been VP of Business Development for Reliance Funding LLC since October 2015 (when the domain was registered) and immediately prior to that he was National Director of Sales for Access Funding.  That's according to his Linkedin profile

5. Then there's Raffi Boghosian the CEO. I called the toll free number for Reliance Funding, spoke with Jason and was able to confirm that Raffi worked there.  Confirmed again by his LinkedIn profile.

6. According to the Better Business Bureau of Greater Mid-Atlantic Region Washington DC and areas of Virginia, Maryland, Pennsylvania and WV, Access Funding is no longer in business.  [ At least this BBB has their act together,  eh  BBB of Greater Maryland?] 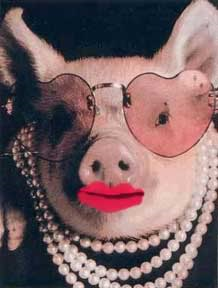 If you put lipstick on me, I'm still me!