Prior to the bogus Chicago Structured Settlement Planning Seminar promoted in Chicago Crains  December 2014 (that I exposed as a fraud non-event earlier this year and tied to Einstein Structured Settlements, a JRR Funding brand),  there was a promoted "San Francisco Structured Settlement Sale Seminar", advertised on SanJose.com as purportedly taking place on September 24, 2014 at 8pm in the "Structure store" at the Westfield Valley Fair Mall.  I spoke to the manager of that store today and there was no such structured settlement sale event on that date.

The brand Structure, was incorporated into Express Men in 2000. The Express Men store at the address in question, sells men's clothing and is still open at 8pm serving its retail customers. according to the manager.     The phone number (561)270^6159 in the bogus sell-structured-settlement ad resolves to getastructuredsettlement(dot)com** which is connected to fatlossbands(dot)com of which JRR Funding's Richart Ruddie is Vice-President and Registered Agent, based in Fort Lauderdale Florida. 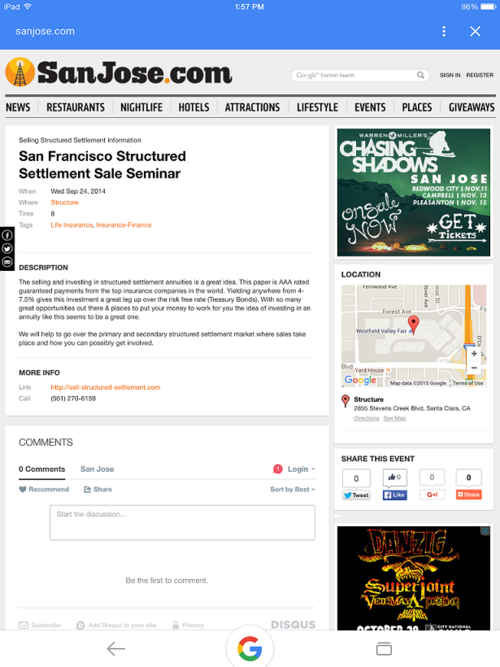 and I have evidence that apparently other structured settlement purchasers, including a member of NASP were inveigled in this "bollocks bolognaise" link baiting with another "seminar" in Dallas. Upon information and belief the NASP member in question used Richart Ruddie and Ryan Blank for its SEO until sometime earlier in 2015.

The likes of Owings Mills Maryland bred Ryan Blank and Richart Ruddie (as well as others like them) are enabled and emboldened by the lack of regulation of solicitation in the structured settlement secondary market.  They are simply exploiting the regulatory chasm. Think about what one has to do to pitch investors in regulated financial products like securities. With structured settlement payment rights, just about any huckster can be an affiliate marketer.

The JRR Funding chicanery finally caught up with them in January 2018, as their frauds saw the Maryland Attorney General set a 7 year ban on JRR Funding, AnnutySold and related companies.