While employed at the New York personal injury firm of Paris & Chaikin from July 2010 to October 2013,  Thomas Rubino forged the signatures of 76 New York state judges on structured settlement transfer orders as part of a total of 234 counts of forgery on 117 falsified orders and other documents.  The story which the industry has known about for 2 years, made the front page of the New York Post with the headline "Law and Forger" (see below).  In addition to its personal injury practice, Paris & Chaikin represented settlement purchasers, such as JG Wentworth, Woodbridge Structured Funding and Stone Street Capital,  in the acquisition of structured settlement payment rights from personal injury victims just like its own clients. 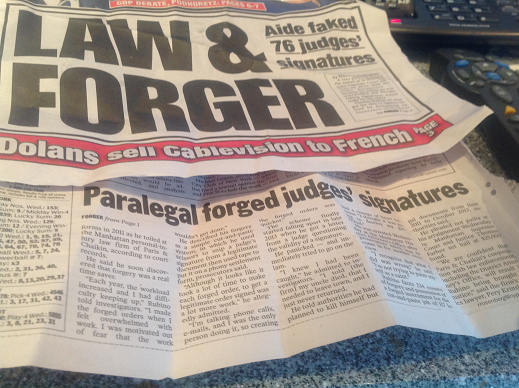 Settlement purchasers, mislabeled structured settlement companies in the Statement of Facts accompanying the Rubino  indictment, purchase structured settlement payments rights from the structured settlement recipient and then sell them to third parties or thee rights are packaged into securities and sold to institutional investors.   The that the New York DA's indictment muddles terms that do not reflect what actually occur, is unfortunate testimony to how far the secondary market through its marketing and false adverting has flourished due to a reckless lack of regulation across the United States.

The indictment, published by the New York Law Journal refers to " structured settlement companies buying annuities from the annuity holder".  This is simply inaccurate.

The New York Structured Settlement Protection Act, requires the approval of a justice of the New York State Supreme Court.to ensure that each transfer, each transaction,  is in the best interest of the annuitant and applicable dependents.

Thomas Rubino was arrested on September 16, 2015. In his confession he stated that he was at first overseen by Ian Chaikin,but over time he worked on cases without oversight.  He summarizes his confession by stating the following: THE FORGED ORDERS OCCURRED BECAUSE OF A COMBINATION OF REASONS:

Rubino says he was:

Despite his confession Rubino pled not guilty.

Lawsuits were filed against Paris & Chaikin in June by Woodbridge, JG Wentworth and Stone Street Capital.  60 emails with forged structured settlement orders provided by Stone Street Capital and 57 emails and one fax with forged structured settlement transfer orders provided by JG Wentworth. It appears from the supporting documents that the fraud against Woodbridge was a lottery case.