« BBB of Greater Maryland is Too Little Too Late to Be Reliable. | Main | MD Lawyer Charles E. Smith Sued for Bad Structured Settlement Advice in IPA »

Genex Capital Chief Operating Officer Boris Drubetsky has egg on his face now that Genex Capital has apparently had to disclose its ownership of the SSQ website in the footer of the website, apparently as part of a settlement with Woodbridge Structured Funding, which had accused Vancouver and Dover Delaware UPS store mailbox-based Genex Capital, Genex Strategies, Inc., and SSQ, of deceptive business practices in a lawsuit filed against the "Genex trio" in 2014.

It's certainly reasonable to ask what else did Boris Drubetsky lie about? 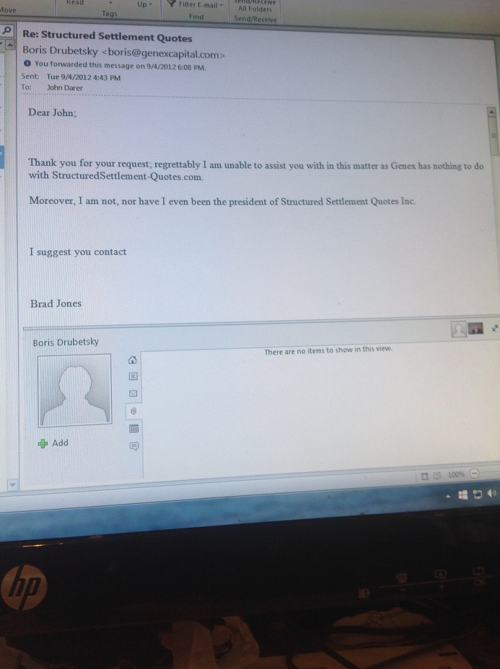 The above email was sent to me by Boris Drubetsky in response to a request made to correct inaccuracies posted on the SSQ website, a vehicle shamelessly used by Genex Capital to brand jack competitors in the structured settlement factoring industry.

When asked about the new partnership, Genex Capital's CEO, Roger Proctor, answered, "This is a win-win for everyone. I'm very enthusiastic to be working with SSQ, the leading secondary market annuity marketplace, to launch this new venture. It's very exciting and we look forward to a long relationship."

In my opinion, it's about time Genex Capital's denial and self promotion came out of the closet.  The question is why they had to lie in the first place?

Woodbridge alleged in its complaint that the Structured Settlement Quotes  (SSQ) website was "nothing more than a fraudulent and deceptive scheme designed to mislead and deceive consumers and benefit certain companies and persons, and in particular Genex Capital and persons associated with Genex Capital".

Another website that has been previously exposed by us to be controlled by Genex, such as Quote Me a Price, now indicates that it is part of the Genex Capital Group.