« "Maximizing Your Annuity" | Just a Another Factoring Fairytale | Main | $6 Billion in Structured Settlement Production? Let's Do It (Again)! »

Einstein Structured Settlements was caught copying a New Mexico law student's entire work in a bonehead move that provides support to ongoing allegations of false advertising against them.

On January 16, 2015, the Einstein Structured Settlements skunks engaged in false advertising by stating falsely, that it "is consistently reviewed as the top buyer of structured settlement and annuity payments"

In Stradling's research paper (at page 7), discussing aspects of the structured settlement secondary market, Stradling characterizes a number of companies as "top purchasers". The list of top purchasers notably DOES NOT include Richart Ruddie and Ryan Blank's Einstein.  The "geniuses" cited Stradling as an authority as follows: "Hat Tip to Jeffrey P. Strandling (sic) a 2015 graduate from the University New Mexico School of law (sic) for writing a detailed analysis about the secondary market and practices of factoring companies in the structured settlement industry"

After Stradling was notified of a potential copyright violation involving Einstein [which again copied Jeffrey Stradling's entire research paper about structured settlements] and being asked by Stradling to remove same, Einstein posted this:

"As per Jeffrey's kind request we have redacted the full research paper".  [ an admission]

Is Einstein Falsely Holding Itself Out as a CFP?

Setting aside the copyright issue and its getting impaled by its own citation, perhaps the most sinister aspect of Einstein's willful misconduct, is its ongoing use of the title " Einstein Structured Settlements CFP in The Industry". The following is a screenshot from a Yahoo Search February 16, 2015. 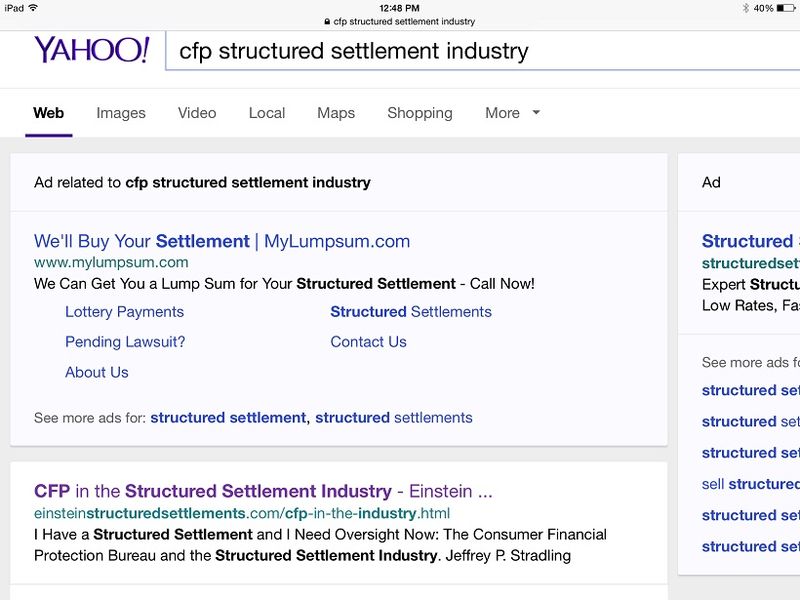 The Certified Financial Planner (CFP) designation is a professional certification mark for financial planners conferred by the Certified Financial Planner Board of Standards (CFP Board) in the United States, and by 25 other organizations affiliated with Financial Planning Standards Board (FPSB), the international owner of the CFP mark outside of the United States. To receive authorization to use the designation, the candidate must meet education, examination, experience and ethics requirements, and pay an ongoing certification fee  [ Wikipedia].  The CFP designation is conferred upon individuals, not companies (or websites masquerading that purport to be a company).

According to Jeffrey Stradling's LinkedIn profile, he is not a  CFP, so are we simply looking at another attempt by Einstein Structured Settlements to hold itself out to be something that it is not ?  Another false advertising stunt that should leave legitimate CFP and the Certified Financial Planners Board of Standards outraged In December 2014 Einstein solicited tickets to a purported structured settlement planning event in Chicago which we researched and found did not happen.

Which companies are benefiting from Einstein Structured Settlements false advertising?  Are any NASP members involved?  NASP members Structured Asset Funding and Fairfield Funding have at times used the services of Ryan Blank and Richart Ruddie.  Shouldn't whoever is benefiting financially from Einstein's improper use of credentials be held accountable as well?