Another day and another snirtle from Einstein Structured Settlements. 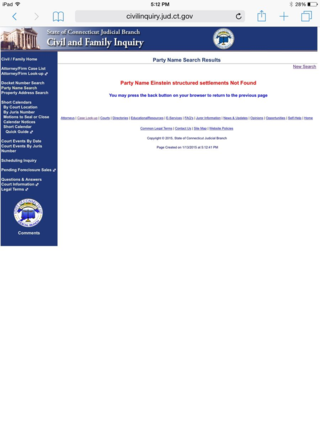 A search of Federal Court records for every Federal Court in every state in the United States of America made on January 13, 2015 shows no case where Einstein Structured Settlements has been a party. [ source: Pacer.gov]

Einstein structured settlements intentionally and falsely claims to have locations in virtually every city ans hamlet in the State of New York and the State of Connecticut. A sub-domain on the Einstein structured settlements website the display locations.einsteinststructuredsettlements.com is used to falsely and misleadingly insinuate that Einstein has office locations in dozens of cities and towns across New York and Connecticut when this is not the case.  [ same holds true for other states like Texas and Oregon]  Example Download Einstein SS phony locations Oswego used to solicit New York and Illinois residents

Anyone living in New York, Connecticut or New Jersey being solicited by Einstein Structured Settlements who later wants to seek legal redress should know that Einstein is not even registered to business with the New York, Connecticut or New Jersey Secretary of State.  When it comes to your structured settlement payments,  which might be your sole source of income, should you trust a company that is not registered to business in your state or paying its dues?