Why would an enterprise like Vancouver's Genex Capital resort to endorsing itself?

On October 25, 2013  a listing for Cash Future Payments was created on structuresettlements(dot)org, a website owned by Oklahoma structure settlement broker Robert Risk that includes a not very prominent settlement purchaser directory.   It is not clear at what time the directory listing was created but it would have to be before 1016am on October 25, 2013.  Why before 1016am you say? Please read on.

On October 25, 2013 at 10:16am, just minutes after the upload of the listing to Robert Risk's site, there is an entry from "Xavier Cantin" that is held out as a "review"for cashfuturepayments.  It is one of 3 reviews for Cash Future Payments within 2 months of the upload of the listing.  Yet no other company, including more recognized companies like JG Wentworth and Stone Street Capital (which had been listed at structuredsettlements.org for more than a year!) had any reviews at the time of posting on the obscure web directory. Virtually nobody has even heard of them and they get 3 reviews, one of which is a selfie?  On this showing, if the credibility of the cashfuturepayment reviews was a theme song,  the structured settlement watchdog would nominate  " Bad to the Bone".

Structuredsettlements.org appears to require some sort of registration process and that you have to be a "member"  to add or update listings.  The registration appears to include a website address of the reviewer's company.  If you mouse over the "review" by " Xavier Cantin" as I have (see image) you will see the URL for cash futurepayments(dot)com, denoting a link to the cashfuturepayments  website.

If you click on the link at the time of posting the link goes to the Genex Capital property. Note the "fingerpoint mouse over "Xavier Cantin" and what comes up when you do that,  in the lower left of photograph,  in the screenshot image below which was captured on September 21, 2014,

Furthermore a report of the inbound links from Ahrefs.com further verifies the existence of the link from a reliable recognized third party source. 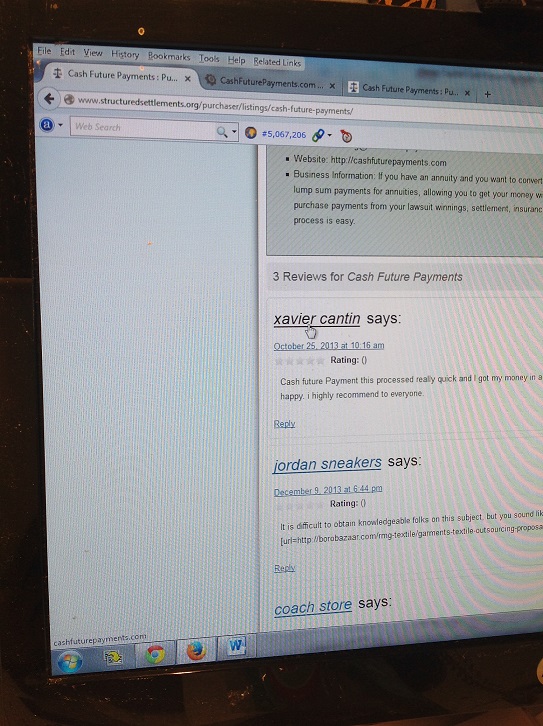 Yellow Pages.com, a Setptember, 2013 review claims  that somsone got a payout on their structured settlement from CashFuturePayments in a week. Considering structured settlement transfers require  judge to approve and all things considered in the transfer process, the review seems suspect. Indeed the Genex Capital website itself states that the process usually takes 6-8 weeks.