Members of the State of Florida Senate and House of Representatives are due to be descended upon by grumpy members of the National Association of Settlement Purchasers, non-affiliated cash now pushers and others opposed to  a pending bill that would set caps to discount rates used in structured settlement factoring transactions and attempt to eliminate forum shopping by requiring petitions for transfer be filed in the jurisdiction of residence as opposed to being filed anywhere in the State of Florida.  [ To wit, the Sumter County court house and the court room of Judge Michelle Morley has become, with respect to structured settlement transfers,  what could be described as a popular "circus" where cash now pushers ride in on their unicyles to get their "cotton candy"]. 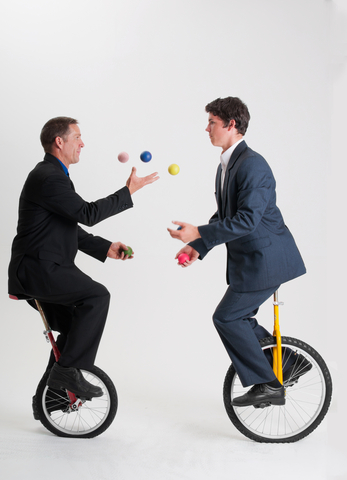 As I posted on March 3, 2014 in Sumter County Florida Structured Settlements Hurry Hurry Step Right Up":

"Nothing could be clearer about Sumter County Florida being a forum shopping venue of choice and the efforts of Sumter County to make it more attractive to cash now pushers:

Clerk of the Court Gloria R. Hayward's web page states at the time of publication of this post, "This is a special project undertaken by our Records Management and Technical Services staff to provide access to case types identified as Foreclosure or Structured Settlements.

This has been done in an effort to improve public access to these bulk case types that have recently been a matter of excessive public inspection".

Its understandable why cash now pushers would be opposed to the bill because some would be out  of business in Florida, as they may have been in North Carolina when rates in that state were capped several years ago. For those with bloated business models,  that rely on financing and cannot obtain it at a cost that makes it economically efficient to operate within the proposed cap of 5 points over the prime rate, it presents a game changer. For those with a  high concentration of Florida business, who cannot adapt, it could cost them.

The question is what is best for consumers?  Wouldn't an interest rate cap benefit consumers?  Cash now pushers may argue that their un-capped  discount rates are still more favorable than credit card rates, but regulators should ignore the syncophants and stay focused.

Let's talk about what the pending Florida bill fails to address and should  (among other things)...cash incentives and aggressive follow up on structured settlement annuitants that would be illegal, in FLORIDA if provided in connection with the placement of insurance or securities.

Cash now pushers scrape court records.  My information is that most of them do. Some cash now pushers do it directly, others hire people to to do it, or subscribe to services where they can obtain information on cases where legal actions have been settled in particular county courthouse. Cash now pushers then use this information in aggressive ways to target structured settlement annuitants. One way is to send out checks as a cash advance, or notice of "rip off"  from official looking but phony government entities.  It's Pollyanna to believe that the secondary market can self regulate.

The checks are followed up with phone calls aggressively "encouraging", possibly even harrassing the annuitant to cash them in an effort,  to tie up the annuitant. Some cash now pushers are falling all over themselves to offer the checks (we've seen a case where  stored value debit card was sent).

Consider a web page on the Einstein Structured Settlements website, which it has been observed typically draws traffic by employing a strategy of brandjacking competitors of its beneficiary, Fairfield Funding. On one of its web pages, Einstein uses Seneca One's telephone number twice on the same page [much as it did with Peachtree-see Einstein Structured Settlements Unethical "Brandjacking" Continues], to promote its cash advance of $5,500 to compete with Seneca One's $5,000 cash advance.   Download 800-519-6031 Einstein SS uses Seneca One's Phone twice on same page 3-15-2014. If I licensed insurance agent did that in Florida in conjunction with the sale of an annuity it would violate the law.  There is one regulatory gap in need of closing!  The Einstein Structured Settlements phone number  888-497-0724  continues to resolve to Fairfield Funding and resolved to the personal voice mail of Rick Hazen, the Sales Manager for Atlanta based Fairfield Funding on March 15, 2014.

Be sure to watch part 1 and part 2 of my interview with Eddie Stone, of Edward Stone law, a former general counsel of JG Wentworth about the state of the structured settlement secondary market and how it can be improved, now up on our YouTube channel.

I look forward to observing the response of the National Structured Settlements Trade Association and its members as well as unassociated members of the structured settlement primary market to the Florida legislation.