Something to "Bauc" About! Structured Settlement Pioneer's "Greatest Achievement" 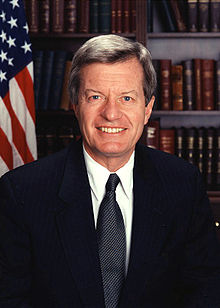 Montana Senator Max S. Baucus has achieved a lot in his 38 years in Congress, but Missoula Montana personal injury lawyer Doug Buxbaum wants to be sure that Americans do not forget that one of Sen.Baucus’ greatest achievements involves a selfless and remarkably successful 30-year campaign to promote dignity and independence for accident victims.

Prior to the Periodic Payment Settlement Act of 1982 there was nothing in the Federal law that recognized Americans’ right to choose a long-term financial settlement instead of a one-time payment.

"This issue is not just vital to the financial dignity of an accident victim and family. It’s also important to America’s taxpayers. If someone is forced to take a lump sum as compensation for an accident and that sum doesn’t last, the person and perhaps a whole family may find themselves requiring public assistance".

Baucus' common sense solution was give people the option to fund for the the long term, with the encouragement of tax incentives.

Buxbaum relates yet another success story about how structured settlements have helped injury victims and their families.

He says  "These days, many Americans look at Washington and can’t understand why nothing gets done. Too many elected officials seem to prefer press releases and TV appearances to reasonable solutions.

To my knowledge, Baucus never ran to the TV networks to tell the country how great he was for helping injury victims and their families. He just went ahead and did it, knowing that hard work and common sense would win the day".