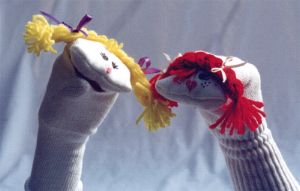 It's a slow day in "Manila Envelope" for sock puppet "Cristina Marquez" and her structured settlement secondary market puppeteer in North America, who is on a jag about commissions on structured settlement factoring transactions, a topic that I covered with the Structured Settlement Transparency Initiative, beginning at the end of 2007.

The timing of the post is helpful in narrowing down who has been involved in cowardly defaming me over the past months.

About two months ago an annuitant from Jessamine County Kentucky  (Mr. Andrew S.) contacted me and I spent an extraordinary amount of pro bono time answering his questions about structured settlement factoring. He stated he had previously done deals with a Canadian company and expressed his dissatisfaction with one of them.  I clearly explained to him that any consultations with selling annuitants are pro bono (as we have done for more than 7 years) and upon his request referred him to two individuals to speak to as alternatives to shop around. I told him if he wasn't satisfied to come back to me for others.  Had the business been placed we would have received no fee. He spoke to the first one and gave me some feedback. He also spoke to the second one who was prepared to beat or match the best offer which purportedly was $185,000 (the number Mr. S. was bargaining with). Mr. S. told the 2nd referred individual he wasn't happy with the Canadian company purportedly because he felt that they spilled the details of a previous deal.

One of those two individual broker's names ended up in the sock puppet's blog post today. It's interesting to note that the sockpuppet grossly misrepresented the nature of litigation in another post and now concedes that the individual is "my pal". Cristina The Sockpuppet also fails to note that I referred Mr. S  to another individual and that a conversation actually took place with that individual.

According to Mr S. one of the two individuals purportedly made an inappropriate verbal sleight regarding one of the Genex Capital officer's sexual preference, which obviously offended the Genex Capital officer. This was corroborated in a letter I received from Mr S., that Mr S permitted me to publish in a subsequent blog post.  Suddenly, even though i neither made the sleight nor would such alleged preference, if true,  matter to me,  I became a target regarding the case in a blog post. The Genex Capital officer, its CEO Roger Proctor, is the only one with both a motive to post, employ or collaborate with someone to post this junk, and involved with the Mr S case.

Postscript Upon information and belief such check was written by Roger Proctor of Genex Capital.  At the conclusion of the Woodbridge Structured Funding civil lawsuit against Roger Proctor's companies Genex Strategies, Inc., Genex Capital Corporation and Structured Settlement Quotes in June 2015, after attempting to conceal its ownership of structuredsettlement-quotes(dot)com for over 3 years, Genex Capital began to state that structuredsettlement-quotes(dot)com was part of the Genex Capital Group. Documents provided to me by Nicholas John Jackson, a Missouri contractor who worked for Genex Strategies, Inc. from June-September 2012, show that the involvement of Roger Proctor and Mt. Airy resident  David Springer with SSQ began in 2011 and prior.  The Mt.Airy Faker has appeared on the SSQ website with two aliases James Spelling and James Goldstein, that he admitted to during June 2013 sworn deposition testimony in the Woodbridge vs Springer defamation lawsuit.

In closing, Cristina the Sock Puppet Marquez and her puppeteer in the structured settlement secondary market, have "unclean hands".

She and her puppeteer have published and continue to display a fabricated email and ignored letters from our lawyers.

She and her puppeteer have refused to correct inaccuracies when notified in writing of such inaccuracies. Pretty heady stuff for someone who accuses someone of "Blog Lies and Deceipt (sic)"

The sock puppet and her puppeteer have engaged in Black Hat social media mentions and other lies that violate the terms of service on hundreds of websites all over the world to prop up the hateful invective that she and/or the puppeteer write.