Constructive criticism for the NSSTA Board of Directors, which recently issued a letter to all members of the structured settlement industry trade association concerning its interpretation of the bylaws on factoring activities of its producing members, with implied threats of expulsion.

The irony of the missive is that there are 3 representatives of structured annuity issuers on the Board of Directors, who I greatly respect, but one or more of whose companies will not split annuity payments if an annuitant chooses to factor their payments (with or without the assistance of a member of the trade association). Arguably the business decisions of companies not to split payments (to save administrative costs) is a significant point of weakness and a contributor or facilitator to annuitants repeatedly factoring structured settlement payments.

By not agreeing to "slice and dice" payments in such circumstances that occur in an estimated 5-7% of structures written, structured annuity issuers cause or contribute to the following:

B. Loss of interface with the annuitant. The annuitant must now deal with the servicing company (possibly the factoring company or a subsidiary) for mundane service requests like change of beneficiary, change of address, change of bank etc. If the annuitant sells small amounts of payments to two different factoring companies they may need to submit separate service requests to each. This can't be good for the life insurance company or the broker who placed them into the structure based on dealing with the annuity issuer.

C. Making their own annuitants increased targets of factoring, if they factor a small amount of payments just once. The S-1 for Imperial Holdings (parent company of factor Imperial Structured Settlements) spoke of re-marketing opportunities to structured settlement annuitants. Upon information and belief, the re-marketing of structured settlement sellers is a significant active and p0tential source of revenue for factoring companies. It is obviously cheaper to conduct transactions with those you already know compared with the cost of advertising to attract those you do not already know.

D. Chapter 7 bankruptcy risk if the servicing company gets into trouble. I interviewed Dallas bankruptcy attorney Bruce Akerly on LBN in October 2009 and he opined that while the annuitant would eventually get payments following a bankruptcy proceeding involving a servicer, there might be some additional costs. Our interview and 6 months of preceding blog posts led to a presentation on the subject and a white paper by Mr. Akerly at the annual meeting of National Association of Settlement Purchasers (NASP) in November 2009. A similar conclusion was reached by Matt Bracy, the recent President of NASP. Some companies now have back up servicers. Yet even many of these companies are smaller than the structured annuity issuing life insurance companies, the source of the annuity payments are being serviced.

In May 2009 I wrote to the leaders of NSSTA and copied the heads of many NSSTA member firms about this issue. What has been done in the last 3 years?

Time for some "GINSU logic". Dripping in irony as if it were written or adapted for the structured settlement industry...."Ginsu has everything a great direct-response commercial could have," said John Witek, author of Response Television: Combat Advertising of the 1980s and a marketing consultant. "Ginsu had humor, demonstration, and a precisely structured series of premium offers I call 'the lots-for-a-little approach.' " Source: Wikipedia (emphasis added) 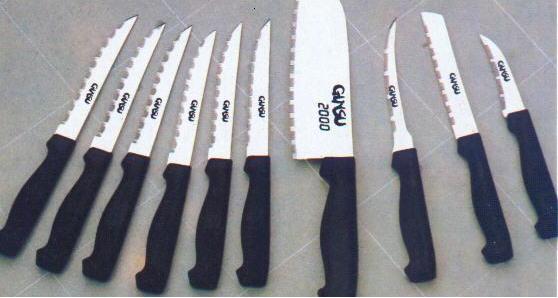