Fisher makes several claims in a blog post summarized below, which are then followed by my response and critique: 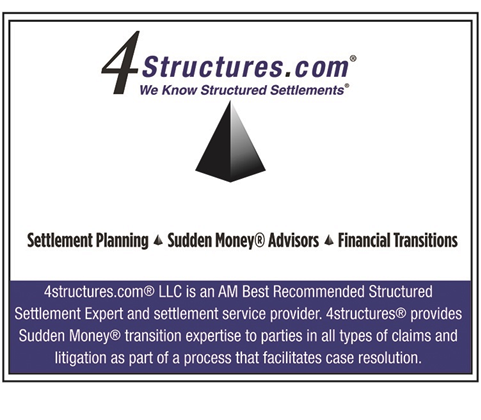 2. Regarding Fisher's complaint about expected payouts we've dealt with this subject several times:

3. As I've pointed out in the blog post cited in #1, the obligation to make the disclosure under §5-1702, is the Defendants or the Defendant's legal representative, NOT the annuity issuer.

4. While enforcement of the New York General Obligations Law is certainly a good idea, an even better way to protect plaintiffs, is for attorneys like Mr.Fisher to simply retain an experiemced settlement consultant to be part of their team.

5. There are different types of structured settlement payments. One of the greatest things about a structured settlement is the ability to contractually guarantee payments that the plaintiff needs or wants for as as long as the person lives. The majority of such payments include some form of guarantee, which assures that payments will be made whether or not the plaintiff survives the payment schedule. Where such payments are life contingent the measuring life is the annuitant, NOT the beneficiary.

6. With all due respect, did the erudite Notre Dame graduate, Mr. Fisher, intend to use the word "deceptful" twice, a word whose definition is apparently only found in the Urban dictionary? Download Definition deceptful - Google Search

7. A structured settlement annuity is but one settlement planning solution, with a plethora of applications and technique. Although Mr. Fisher has not discussed any alternative products to structured settlements, it must be noted that such financial products and solutions may have up front fees or ongoing fees that can be significant in the aggregate. For example alternate or complimentary solutions like trusts may carry substantial up front fees, and a trustee earns his/her/its annual fee regardless of investment performance.

8. While the establishment of a structured settlement annuity may seem to be routine,  because the efforts of a capable settlement consultant make it appear seamless, and setting aside the consideration of the settlement planning or financial planning value proposition that the many qualified settlement consultants bring to the table,  It's not just writing an annuity application! Fisher fails to consider the impact of moving parts in involved in the settlement of a personal injury or medical malpractice case, particularly when minors or incompetents are involved; and/or when there is a need for a supplemental needs trust; and/or where the defendant or insurer will not prefund the structured settlement, and/or where diversification of annuity issuers is prudent due to case size and daily rates are being quoted, or where several iterations of a 50A or 50B analysis have been required.

10. Fisher offers no substantiation to his claim that the defendant will fund for less than the amount agreed to.

11. It should be noted that Mr. Fisher's Federal and state trial lawyer associations solicit and accept substantial financial contributions from structured settlement firms which offer and place structured settlement annuities. Those firms make the same 4% commission (or a share thereof) that Fisher derides. It is ultimately from the commissions that they make those contributions. If Mr. Fisher is truly concerned about annuity commissions perhaps he should start a lobby to legalize rebating by insurance agents in the State of New York. Then agents could legally divert part of their commissions to injury victims instead of going to fight tort reform. I'll bet THAT would go over like a lead balloon at the New York State Academy of Trial Lawyers which is sponsored by FOUR structured settlement firms according to its website!

Once again and in conclusion, attorneys would be wise to retain an experienced and qualified settlement consultant as part of their team.